Intel is expected to start shipping its third generation Core series processors for desktop and notebook computer soon. Code-named Ivy Bridge, these chips will be the first 22nm processors from Intel and they’ll offer reduced power consumption and better performance. 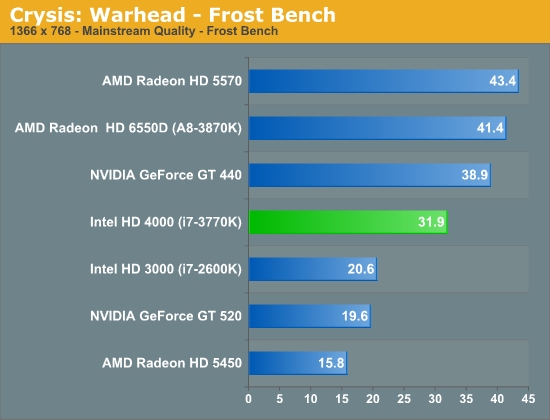 But you’ll only see a modest increase in CPU performance over today’s Sandy Bridge chips. Where you’ll see a much bigger improvement is in the integrated graphics.

But you probably want a more powerful graphics card if you want to play bleeding edge video games, because Intel HD 3000 isn’t really up to the task.

Intel HD 4000 graphics, on the other hand, just might be.

The folks at AnandTech got their hands on a pre-release Intel Core i7-3770K desktop processor with integrated Intel HD 4000 graphics and ran through a number of benchmarks.

In a nutshell, they found that the HD 4000 graphics offer about 30 to 40 percent better performance than the graphics you get with a similar Sandy Bridge processor. What that means is you can actually play Crysis, Skyrim, and a number of games that you probably wouldn’t have thought of playing on a computer with integrated graphics a few years ago.

But it’s pretty impressive that Intel is boosting graphics performance and to a lesser degree CPU performance while decreasing power consumption in its upcoming processors.

One reply on “Intel Ivy Bridge graphics getting a big boost (Yes, it can run Crysis)”