Online video service Hulu lets US residents stream thousands of TV shows and movies to a PC for free. The company has also offered a premium Hulu Plus service for $8 per month for a while, allowing subscribers to access additional episodes and stream to an iPhone or Android phone.

Now Hulu Plus is also available for select Android tablets. 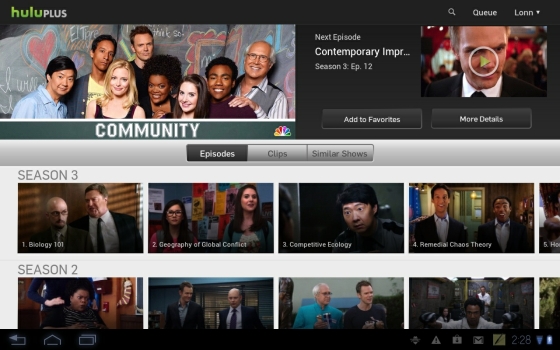 At this point, the Hulu Plus app is officially available for the following tablets:

You’ll need a tablet running Android 3.0 or later to use the new version of the app. It has a tablet-friendly user interface designed to take advantage of the fact that tablets have bigger screens than phones. The UI actually looks a lot like the Hulu website, actually, if the Hulu site were easier to navigate with your fingertips.

It’s not clear why tablets from Samsung, Archos, and others didn’t make the cut… but some of the most popular Android tablets already had Hulu Plus apps. The Barnes & Noble NOOK Tablet ships with Hulu Plus and it’s available as an optional download for the Amazon Kindle Fire.

One reply on “Hulu Plus now available for Android tablets”