A few months ago Gadmei started selling an 8 inch tablet with a glasses-free 3D display. At the time, the only model available in the US was the Gadmei T863 running Android 2.3 Gingerbread. 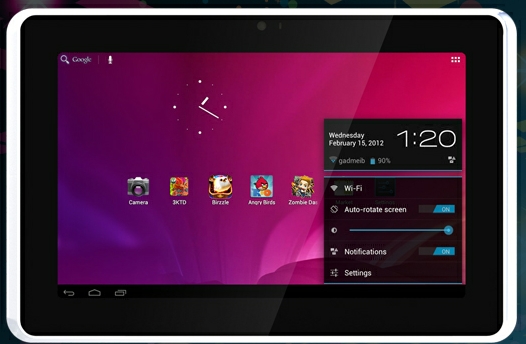 The Gadmei T860 showed up at the FCC this week, and the Gadmei T883-D is already available for purchase from Brando for $222.

As far as I can tell, these two models are virtually identical. According to the Gadmei Facebook page, both tablets run the same Android 4.0 firmware.

What you’re looking at is a tablet with an 8 inch, 1280 x 768 pixel display, a capacitive touchscreen with support for 5-point multitouch input, and an ARM Cortex-A9 processor with Mali 400 graphics.

There’s an HDMI output and support for 1080p HD video playback. But the most unusual thing about the tablet is the screen which can display some 3D videos and images without any special glasses.

It’s pretty tough to demonstrate the 3D graphics with a standard camera, but you can get a rough idea of how it works in the video I shot at CES in January.

I was pleasantly surprised to see that the 3D effect really does work — as long as you look at the tablet from exactly the right angle.

The Gadmei website has more details about the T883 and T860 tablets.