Fujitsu has confirmed rumors that the company will be bringing ultrabooks to market soon. At the CeBIT trade show in Germany this week, Fujitsu showed off a thin and light laptop with a 14 inch display and a few premium features. 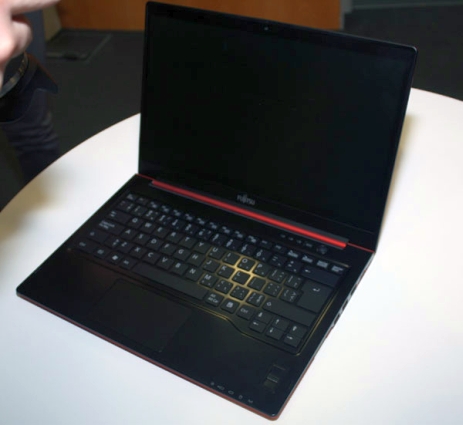 We still don’t have details about the processor, storage, screen resolution, or some of the other specs such as the starting price. But we do know that the Fujitsu ultrabook will feature:

The ultrabook will weigh less than 3.3 pounds and measure about 0.62 inches thick.

The folks at Notebook Italia also noticed that the laptop screen can fold back 180 degrees so that it rests flat on a desk or table behind the keyboard.

If Fujitsu is following the roadmap that leaked last month, it’s likely that this ultrabook will hit the streets in May.

Ultrabooks are thin and light laptops that typically measure less than 0.8 inches thick and weigh less than 4 pounds while using the latest Intel processors. They also use either solid state storage or a hybrid storage system that combines a large hard drive with a smaller solid state disk.

Currently most ultrabooks have starting prices between $800 and $1100. Since Fujitsu is emphasizing this model’s security features, it’s likely to be aimed at business and enterprise markets which means it will probably be one of the pricier models.

Fujitsu is expected to unveil more details about the ultrabook soon.