The BlackBerry PlayBook was the best-selling tablet at two major electronics chains in Canada last week. Both Future Shop and Best Buy Canada have tole Research in Motion that the 7 inch tablet outsold the competition… including Apple’s iPad 2 for the week. 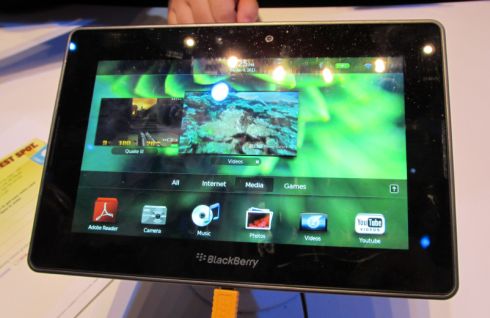 Before you break out the champagne to toast RIM though, there are a few things to keep in mind.

First, Apple is expected to unveil the iPad 3 in a few days. It’s likely that many potential iPad customers are waiting to see what Apple announces before making a purchase.

RIM has also been selling the PlayBook for more than 50-percent off the original list price. When the company introduced the tablet nearly a year ago, the cheapest model cost $499. Now you can pick one up for as little as $199.

At that price, it’s possible the company is even selling tablets for less than the cost of building them just to get them into more customers’ hands.

In other words, it’s possible that one of the main reasons the PlayBook snagged the top spot is because its customers for its biggest competitor are just waiting to make their purchase. And it’s also possible that RIM is selling a lot of tablets… but losing money in the process.

So… I can’t decide whether this is good news or not, but RIM is certainly using a lot of exclamation marks on Twitter to celebrate.

Of course, the launch of BlackBerry PlayBook OS 2.0 which added functionality to the tablet such as the ability to run some Android apps as well as native email, calendar, and contact apps might have helped.