Have a BlackBerry PlayBook tablet and a BlackBerry smartphone? Soon you may be able to use your phone as a game controller for your tablet… which is pretty cool when you realize the tablet also has an HDMI port that lets you view games on a big screen TV. 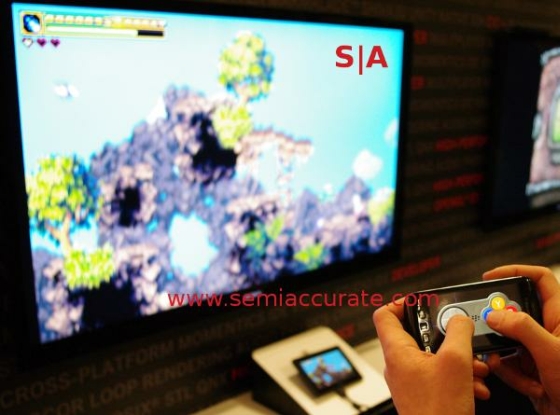 One of the features baked into the recently released BlackBerry PlayBook OS 2.0 is the ability to use a BlackBerry smartphone as a sort of remote control for the tablet. For instance, you can control a presentation or photo slideshow from your phone.

But the folks at SemiAccurate spotted a demo at this year’s Game Developers Conference showing a BlackBerry phone working as a video gamepad thanks to an app developed by engineers at Research in Motion.

This isn’t the first time we’ve seen phones and tablets play well together. A handful of iPad apps can use an iPhone as a game controller. But I believe it’s a first for the BlackBerry ecosystem.

Of course, a touchscreen smartphone isn’t going to be as easy to use as a Playstation, Xbox, or Wii controller with physical buttons. But while there are apps that let you pair those controllers with Android tablets over a Bluetooth connection for a little video gaming action, the advantage to this phone/tablet pairing is that you’re more likely to carry your phone around with you than a spare Wiimote.