Auraslate is positioning it’s 7 and 10 inch Android tablets as hacker-friendly devices with open source software. In fact you even get a disc with the source code when you buy one of the company’s tablets. 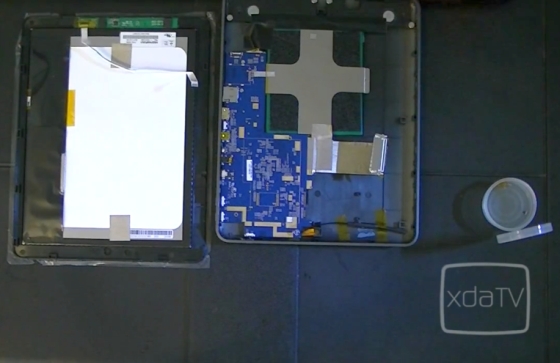 But just how easy is it for an independent developer to work with one of these tablets? Pretty easy, it turns out.

AdamOutler posted a video of the Auraslate 1026 for xda-developers that starts with an unboxing, continues to show the process of disassembling the tablet altogether, and finally shows how to hook the system board up to a computer to run some diagnostics and learn what makes it tick.

There aren’t many surprises. we already knew that the device has a 10 inch, 1024 x 768 pixel display, 512MB of RAM, 4GB of storage and a 1 GHz ARM Cortex-A9 processor. AdamOutler did discover that the CPU is produced by AMLogic though, and that’s not something listed on the spec sheet.

More importantly, he reports that it’s pretty easy to take apart the tablet and work with the software. Although the $199 tablet ships with Android 4.0, developers that know what they’re doing should be able to modify the software, produce custom ROMS, or even port other operating systems to run on the hardware.