At the time we noted that Asus says the RAM is fixed to the motherboard and can’t be upgraded. But it looks like that might not actually be the case… at least some Eee PC 1025C units do have SODIMM slots, allowing you to use up to 2GB of memory. 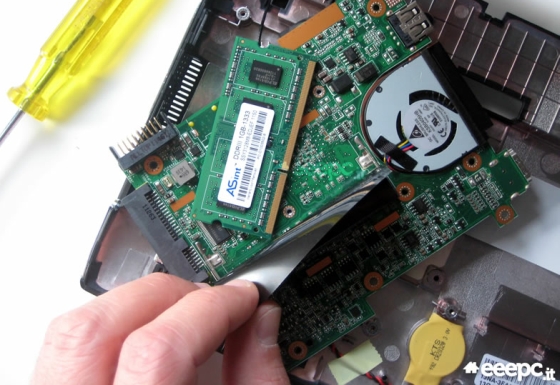 Riccardo Palombo at Eee PC.it took apart an Eee PC 1025C to see what was under the hood. Since there’s no RAM access panel on the bottom of the netbook the only way to get at the hard drive, memory, and other components is to disassemble the laptop case. It’s not for the faint of heart.

Update: Well, that’s done. It looks like you can upgrade the RAM on the model with the N2600 processor. It’s just not any easier than upgrading the faster model.

Aside from the difference in clock speed, the N2800 chip uses more power, supports up to 4GB of memory, and has 640 MHz graphics instead of the 400 MHz graphics in the slower chip.

Both versions of the netbook ship with Windows 7 Starter Edition which only supports up to 2GB of memory. So even though the N2800 processor supports 4GB of RAM (unlike the N2600, which tops out at 2GB), you’d need to upgrade the operating system if you want to use more than 2GB.