The Spark tablet is a 7 inch tablet that will ship with Linux and the KDE Plasma Active user interface. It’s expected to ship in May for about $265, and it should go up for pre-order soon. 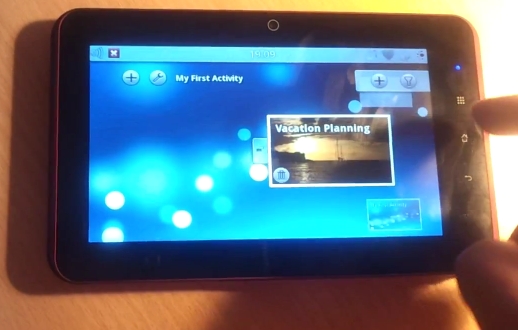 KDE developer Aaron Seigo has posted a first video of  Plasma Active running on the tablet. It seems to respond well to touch, and the animated effects look pretty smooth — although there appears to be a little lag in some activities.

Under the hood, the tablet is running Mer Linux, which is the open source continuation of MeeGo Linux. Plasma Active runs on top of that.

The Spark tablet is basically a rebranded version of the Zenithink C71 tablet which has been configured to run Mer and Plasma Active instead of Google Android.

It’s not exactly a top-of-the-line tablet, but it’s one of the first to be marketed as a truly open device, with open source software, and unlocked bootloader, and even an app and content store based on an open platform — anyone will be able to create their own custom content stores for the Spark tablet.

Update: In related news, the first code for the open source graphics driver for ARM Mali graphics is now available. It’s still in the early stages, but it should help developers working on projects like the Spark tablet.