NEC has been offering a dual-screen Android tablet in Japan since last year, and the company plans to launch a new version internationally this summer. But the Cloud Communicator may not be the only dual screen device on NEC’s roadmap. 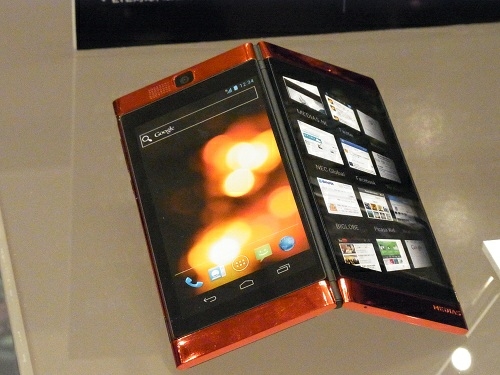 The company plans to show off a new dual-screen Android smartphone concept at Mobile World Congress in Spain next week.

Japanese site GetNews has a few photos of a non-functional prototype, which appears to have the Android user interface taped onto a frame.

But the pictures paint an interesting picture of a tablet with touchscreen displays on the front and back panels. When you want to use the two screens together as one large display for viewing movies, surfing the web, or other activities, you just unfold the tablet.

The device would run Google Android 4.0 and support 4G LTE, but there’s not much more information available at this point.