Fujitsu is starting to provide a glimpse at its upcoming computers and accessories for 2012. Romanian site imidoresc.ro has posted a few slides from a recent event, and they show a number of intriguing products including new tablets and notebooks. 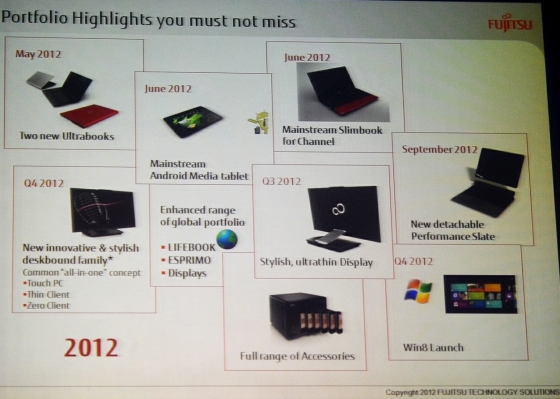 In the notebook space, it looks like Fujitsu plans to launch two new ultrabooks in May, 2012. These will probably fall under the Fujitsu Lifebook brand and like other ultrabooks they’ll be thin and light laptops with Intel processors.

The roadmap also shows a new “slimbook” due out on June, and the company will continue to make laptops with a wide range of screen sizes.

In the tablet space the company plans to launch a new “mainstream” Android tablet in June 2012 and a tablet that looks a lot like the Asus Eee Pad Transformer or Lenovo IdeaTab S2 10 in September. That model will have a detachable keyboard, although it’s not clear from the slide if this will be an Android tablet or a Windows model.

Fujitsu also plans to offer a Windows 8 tablet when the operating system launches in the fourth quarter of 2012.