The Barnes & Noble NOOK Tablet normally sells for $249. But today you can pick up the 7 inch Android tablet for $50 off. Just visit the B&N eBay store, add the tablet to your cart, and apply the coupon CNOOKDEAL at checkout. 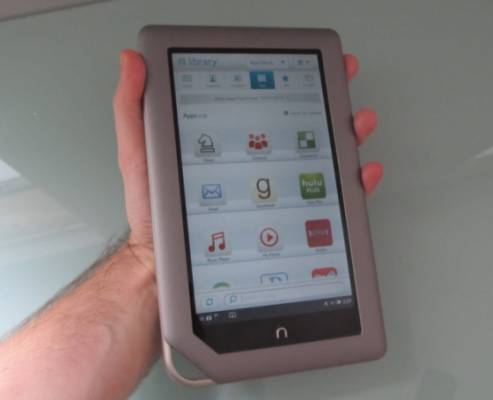 On the one hand, this temporary sale just means you can pick up a NOOK Tablet today for the same price Amazon always charges for the Kindle Fire.

On the other hand, you could make the case that the NOOK Tablet is the better machine — at least in terms of hardware.

Both Amazon and Barnes & Noble customize the heck out of the Android software on their tablets and offer their own app stores instead of the official Google Android Market.

But Amazon has more apps in its app store and the company also has its own music and movie stores, unlike B&N. Amazon also offers perks for Prime subscribers including the ability to check out one eBook per month from a lending library and the ability to stream thousands of movies and TV show episodes for $79 per year.

For the geeky set, the Kindle Fire has one big advantage over the NOOK Tablet right now: It has an unlocked bootloader and there are already a handful of custom ROMs available for the Kindle Fire including CyanogenMod 9 and MIUI 4.0.

NOOK Tablet hackers have been making quite a bit of progress with that tablet though, and it’s already possible to root the tablet, sideload apps, and install ClockworkMod Recovery. An alpha version of CyanogenMod 7 for the NOOK Tablet is also being tested by a small group of developers.

Anyway, long story short, the NOOK Tablet is $199 today only, and it’s a pretty good price for a pretty good tablet — whether you plan to use it as B&N intended or hack it and turn it into a more conventional Android tablet one day.