On paper the $249 Barnes & Noble NOOK Tablet looks a lot like the $199 Amazon Kindle Fire. They both have 7 inch, 1024 x 600 pixel IPS displays and 1 GHz TI OMAP 4 dual core processors. But the NOOK Tablet has twice the storage of the Kindle Fire and costs $50 more. 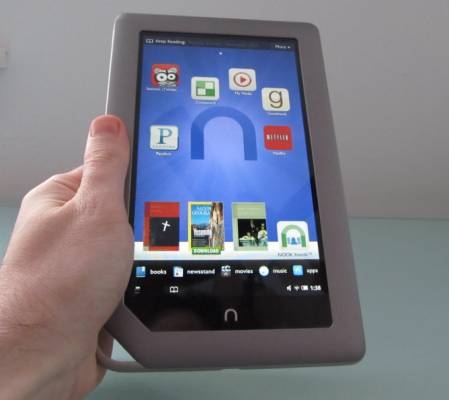 Now it looks like B&N may be preparing to launch a cheaper model with less storage to compete directly with the Kindle Fire.

The Verge got a look at some leaked product information from Walmart suggesting that a NOOK Tablet with 8GB of storage could launch on February 22nd.

Right now B&N only offers a model with 16GB of storage, while the Kindle Fire has 8GB.

Interestingly Barnes & Noble does have a $199 tablet with 8GB of storage. It’s called the NOOK Color and it’s been available since 2010. But that tablet has a slower 800 MHz TI OMAP 3 single core processor.

It should be interesting to see whether B&N discontinues the NOOK Color or just drops the price even lower if and when the new NOOK Tablet hits the market.

Other things that set the NOOK Tablet apart from the Kindle Fire include the microSDHC card slot and built-in mic found on the NOOK but not the Kindle. B&N also has a large, comfortable-to-grip plastic bezel around the display.

On the other hand, while B&N has digital content stores for eBooks, magazines, newspapers, and apps, Amazon has all of those things — plus music and movie stores, giving the Kindle maker a bit of an edge when it comes to the ecosystem surrounding the tablet.

It’s worth noting that some analysts think Barnes & Noble is already one of the top 5 Android tablet makers in terms of shipments. But Amazon may be moving as many as twice as many Kindle Fire tablets as B&N is shipping NOOKs.