Android tablets are a dime a dozen these days… but if you’re not happy with the software that comes with your tablet you have to figure out if you can root the device, unlock the bootloader, and install custom firmware. Or you can buy a tablet that has nothing but open source components. 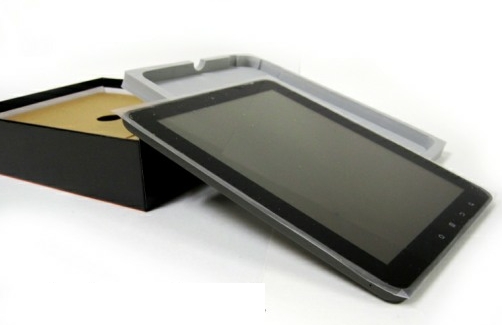 Up until recently that second option wasn’t really much of… well, an option. But a new company called Auraslate is offering 7 and 10 inch tablets designed to be hacker-friendly. You can buy either tablet preloaded with a version of Google Android 4.0 Ice Cream Sandwich. Or you can spend a little extra to get a disk with all the source code.

Auraslate sells the tablets as development kits, and as such doesn’t offer any warranties. But the good news is that you can pick up a 7 inch Auraslate LifePad 726B for as little as $139.

It’s a 7 inch model with an 800 x 480 pixel capacitive touchscreen display with Corning Gorilla Glass. It has an 800 MHz ARM Cortex-A9 single core processor which can be overclocked to 1 GHz and 400 MHz embedded graphics.

Auraslate says you should get up to 6 hours of battery life from either tablet, although the 10 inch model has a larger battery.

The company is a startup without much of a history — and Auraslate is clearly doing many things on the cheap. The company blog is hosted on Blogspot and the forums are hosted at freeforums.org.

But if you’re looking for an inexpensive hacker-friendly tablet and you’d prefer an Android-oriented project to the $265 Spark Linux tablet, Auraslate’s products look interesting.