The Asus PadFone is a 4.3 inch smartphone which you can use on its own — or as the brains of a 10 inch tablet when you want a larger screen and extra battery life. The idea is that you don’t have to keep data on your phone and tablet synchronized when your phone is your tablet. 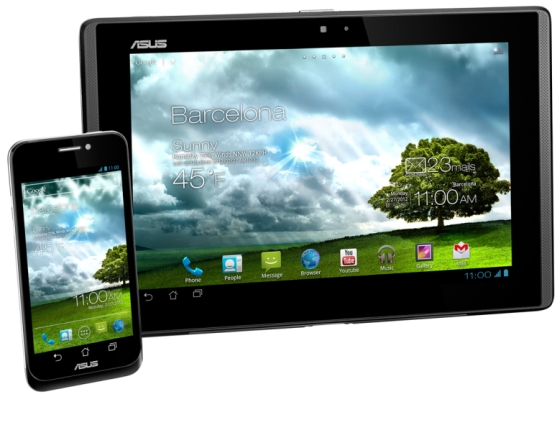 Asus has been showing off the PadFone concept since last summer — but now the company says it’s almost ready to roll. The Asus PadFone and PadFone Station Dock should start shipping in April.

The PadFone itself features a 4.3 inch, 960 x 540 pixel Super AMOLED display with Corning Gorilla Glass. It has a 1.5 GHz Snapdragon S4 processor with Adreno 225 graphics and runs Google Android 4.0 software.

The phone has an 8MP rear camera with auto-focus, an LED flash, and F/2.2 aperture as well as a front-facing VGA camera.

The Asus PadFone Station doesn’t have its own processor, memory or storage, since it’s basically an extension of the phone. But here’s what it does feature:

You can dock the phone in the tablet by lifting a door in the back of the docking station and locking the phone into place.

You can also get an optional stylus for writing or drawing, and an optional keyboard dock that allows you to use the tablet like a laptop. In other words, you can dock the phone in a tablet station and then dock that into a keyboard.