Asus introduced a new 7 inch Android tablet at the 2012 Consumer Electronics Show in January. It’s called the Eee Pad MeMO and it has a 1280 x 800 pixel display, an NVIDIA Tegra 3 quad core processor, and a $249 price tag.

Recently Asus added a product page for the Eee Pad MeMO to its website… but it’s not for that model. 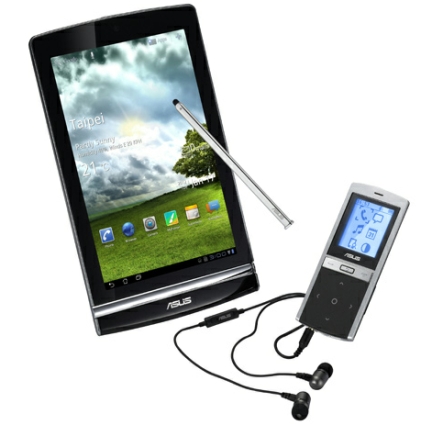 Instead, it looks like Asus is showing off the Eee Pad MeMO 171… a 7 inch tablet it introduced at CES 2011 which has yet to go on sale.

The tablet has 1 GB of RAM, 16GB of storage, and a 10 hour battery. But it’s the accessories that set this tablet apart.

The MeMO 171 has a stylus for writing or drawing on the screen. It slides into a slot on the front of the tablet for easy access.

Asus also bundles a MeMIC Bluetooth headset with the tablet which lets you make phone calls, listen to music, or perform other actions while the tablet is in your bag or pocket.

There’s no word on if or when the MeMO 171 will go on sale, or which countries it will be available in. But it looks like Asus still plans to bring this tablet to market more than a year after first unveiling it.

Asus hasn’t yet said when it will release the $249 Tegra 3 version of the MeMo tablet.