Archos has added yet another tablet to its line of low-cost Arnova tablets. The latest is the Arnova 8b G2, a slight variation on the Arnova 8 G2 which has been available for a few months. 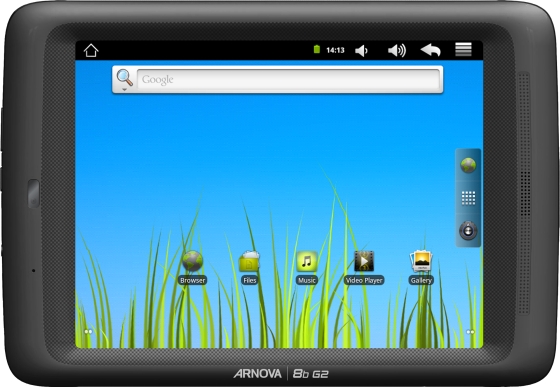 The new tablet has a slightly different case design, and doesn’t feature physical home, back, menu, or search buttons.

While the Arnova 8b G2 will ship with Android 2.3 Gingerbread software, that could be a sign that Archos plans to update the tablet with Android 4.0 Ice Cream Sandwich soon. Google’s newest operating system doesn’t require those hardware buttons.

It also has a front-facing camera, mic, g-sensor, and speaker and supports 802.11b/g WiFi. There’s a microSDHC card slot for extra storage.

According to the spec sheet, the tablet also supports the optional Archos 3G USB stick and USB host cable if you want to connect to mobile broadband networks or hook up a camera, USB flash drive, or other device.

Archos hasn’t unveiled the price or release date for the new tablet yet, but the original Arnova 8 G2 sells for as little as $149.