The Acer Iconia Tab A200 is a rather run-of-the-mill 10 inch Android tablet with a 1280 x 800 pixel display and a 1 GHz NVIDIA Tegra 2 dual core processors. But it’s also now one of the first tablets on the market to get an official Android 4.0 software update. 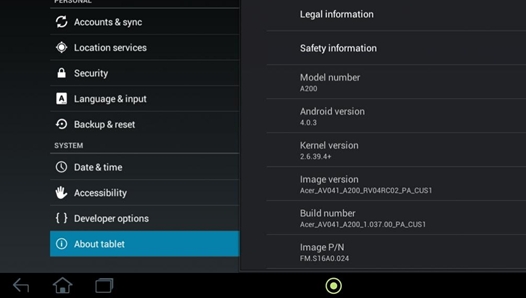 Acer launched the A200 last month. At the time it shipped with Google Android 3.2 Honeycomb. But the folks at the Acer Tablet Forum started to notice this weekend that Acer was rolling out a software update — and it turns out it’s Android 4.0 Ice Cream Sandwich.

The new software brings a refined user interface, the ability to remove items from your recent apps menu, a new People app, and a number of other improvements.

While Android 4.0 doesn’t look all that different from the previous version of Google’s mobile operating system, the software has a more consistent look and feel when you move from app to app and menu to menu. Some of the minor changes also make the software simpler to use — for instance you can now remove items from your notification window by swiping from left to right instead of tapping an X button.