As expected, Barnes & Noble has introduced a new version of the NOOK Tablet with just 8GB of storage and 512MB of RAM. It’s available from B&N for $199. You can still pay $249 to get a model with twice the RAM and storage if you prefer. 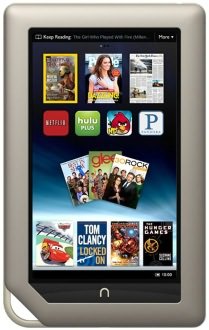 The bookseller is also dropping the price of the original NOOK Color. You can now pick up that 7 inch Android tablet with an 800 MHz TI OMAP 3 single core processor and 8GB of storage for $169 — although if you’ve got the extra $30 you should really just buy a NOOK Tablet for a little more money and get the faster 1 GHz TI OMAP 4 dual core processor.

The new pricing means that you can pick up an entry-level NOOK Tablet for exactly the same price as the Amazon Kindle Fire. Both tablets feature 7 inch, 1024 x 600 pixel displays, OMAP 4 processors, and 8GB of storage.

But the NOOK Tablet has a microSD card slot for expansion, physical volume buttons, and a built-in microphone, which the Kindle Fire lacks. On the other hand, Amazon has more apps in its app store as well as its own music and movie stores, which B&N lacks.

Up until recently there was also no way to install custom firmware on the NOOK Tablet, while the Kindle Fire can run CyanogenMod, MIUI, or other software. But that changed this week when the first public alpha of CyanogenMod 7 was released for the NOOK Tablet.