The Raspberry Pi Foundation has announced that the first of its $35 mini-computers are now available for purchase… sort of. 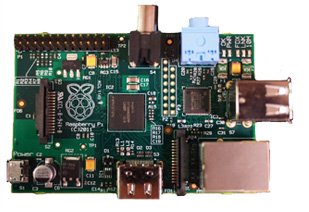 The group signed up two retail partners to help produce and distribute the computers, but both RS Components and Premier Farnell had problems keeping up with the heavy demand placed on their websites this morning… and it appears both companies have sold out of Raspberry Pi devices.

You can now register to be notified when more computers are in stock. The good news is that the reason Raspberry Pi partnered with these companies is so that it would be able to produce large quantities of the little computers more quickly than the foundation would have been able to achieve on its own.

The Raspberry Pi features a 700 MHz Broadcom BCM2835 ARM system-on-a-chip processor with support for 1080p HD video playback and hardware-accelerated graphics. It has 256MB of RAM and an SD card slot for storage and HDMI port for video output. The computer can run Fedora or other Linux-based software.

At launch only the $35 model is available. This is the version with built-in Ethernet capabilities and 2 USB ports.

Soon there will also be a $25 model which lacks either of those features, but which has the same processor and other components.The group has also announced that this model will ship with 256MB of RAM, which is twice the original goal for the $25 version.

Initially the folks at Raspberry Pi had designed the computers for schools and other educational institutions. But it turns out that when you tell tech geeks that you’re working on a $35 computer that can play Quake III, function as a media center PC, and run a pretty functional version of a popular Linux distribution, they get a little excited.

So the first batch of computers are being sold to enthusiasts, which the foundation hopes means that by the time Raspberry Pi is ready for educational use there will be a robust community of software developers and hackers building interesting things for the platform.