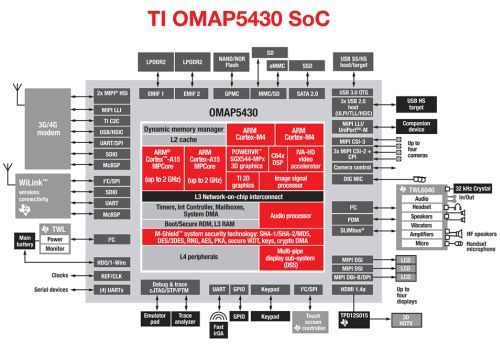 Texas Instruments plans to start sending samples of its new OMAP 5 processors to partners next week. The company also unveiled a reference design for an Android phone based on the new ARM Cortex-A15 dual core processor.

The 28nm chip is a dual core processor with clock speeds as high as 2 GHz, but it also offers a performance boost so that it should actually be as much as 3 times faster than a 1 GHz ARM Cortex-A9 processor such as the TI OMAP 4 chip.

The new processors can handle 3D high definition video and can even upscale 2D video to 3D on the fly. It can also handle up to 8GB of RAM.

But the performance boost is only part of the story. OMAP 5 processors are also expected to use 60 percent less power than an OMAP 4 chip.

While the chip maker is moving to the sampling phase, it will still be a while before we see any actual products with the new processors. We might not see OMAP 5 phones or tablets until early 2013.