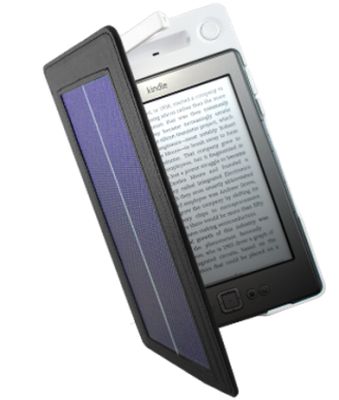 There are two really cool thinks about eBook Readers with E Ink displays. First, their high contrast displays are easily readable outdoors in direct sunlight. Second, they use so little power that they can run for weeks, or even months at a time without charging.

A company called SolarFocus has decided to make the most of those two features by releasing a solar case for the Amazon Kindle. The SolarKindle has a solar panel built into the cover which you can use to charge the eReader. It also has a built-in LED booklight so you can even read at night.

The SolarKindle has a built-in 1500mAh battery so it can store energy even when the Kindle isn’t plugged in. The Kindle (and the book light) both draw energy from that battery, not directly from the solar panel.

Unfortunately the SolarKindle will double the price of your $79 Kindle. It’s available for pre-order for Amazon for $79.99

and it’s expected to ship later this month.