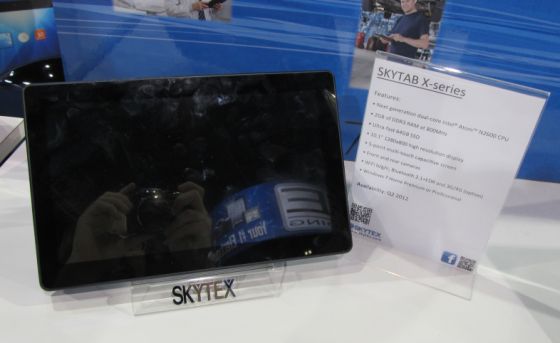 Skytex is preparing to launch a new tablet called the SkyTab X Series with a 1.6 GHz Intel Atom N2600 Cedar Trail in a few months.

The company already offers a Windows Slate PC with an Intel Atom N550 Pine Trail processor. It’s called the SkyTab S Series, and it has a 9.7 inch, 1024 x 768 pixel screen and currently ships with Windows 7. But the company is showing off a model running Windows 8 — and the plan is to offer Windows 8 on the tablet once Microsoft releases the next-generation operating system later thie year.

What sets the new X Series apart is the faster processor with support for better battery life, the use of a solid state disk instead of a hard drive, and a higher resolution display.

The SkyTab X Series will have a 10.1 inch, 1280 x 800 pixel display, a 64GB solid state disk, WiFi, Bluetooth, optional 3G or 4G capabilities, and a 5-point multitouch display. It will measure about half an inch thick (although the hand-built demo on display at CES is a little thicker than that).

Skytex will ship the new tablet with Windows 7 at launch, but a Windows 8 version should be available later this year.