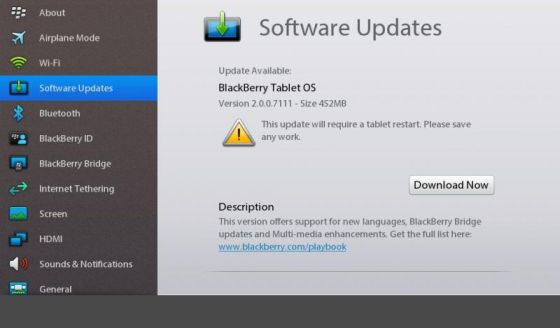 Research in Motion has released a new beta version of OS 2.0 for the BlackBerryPlayBook Tablet. You can register your Playbook to download OS 2.0.0.7111 at the BlackBerry website.

The new software is aimed at developers that want to test their apps before PlayBook OS 2.0 is available to the public. But the latest beta does include a handful of new features including support for predictive text and autocorrect while typing.

Some early users also report that apps run more quickly, and that Android apps they’ve loaded before updating continue to work in the Android App Player even after upgrading to the latest beta.

Unfortunately, like most major software updates, OS 2.0.0.711 removes root access. So if you’ve rooted your PlayBook with Dingleberry, you’ll probably need to wait for the developers to updating their rooting tools before you can re-root the tablet. Or you can downgrade to an earlier version of PlayBook OS.

(and sometimes even less).