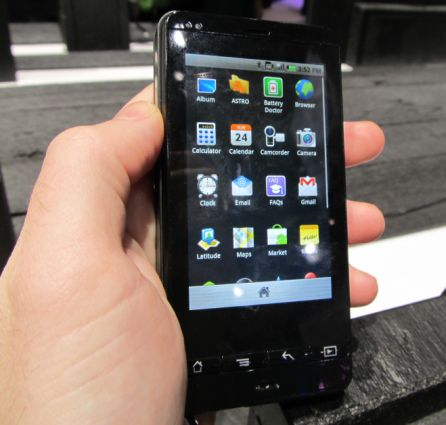 Polaroid has introduced a 16 megapixel camera with a 3x optical zoom which will be available in April for about $299. Oh yeah, and it runs Google Android… and makes phone calls

The Polaroid SC1630 has a 3.2 inch, 800 x 400 pixel touchscreen display and a custom version of Android 2.x with an emphasis on a few key apps including the camera app, photo album, and email. There’s also a camcorder app for shooting video.

While the camera has a resistive touchscreen, it’s fairly responsive to finger input and I didn’t have any problem navigating between apps or snapping photos. Like any serious camera, you actually take a picture by pressing a button on top of the device, not an on-screen button.

Below the screen you’ll find physical hardware buttons for Android functions. You actually have to click down on these buttons unlike the capacitive touch buttons found on most Android phones. That’s a good thing because it means you probably won’t exit the camera app by accidentally brushing the home button when you’re trying to snap a photo.

The device has 512MB of RAM and 512MB of storage space for apps, as well as a microSD card slot for up to 32GB of additional storage. The demo unit appears to have the complete Google experience including the Android Market and Google Maps.

The SC1630 supports WiFi and Bluetooth, and can also connect to cellular networks. Polaroid is talking to network operators about the possibility of offering a phone version of the camera.

Overall the idea of an Android phone with an optical zoom that’s capable of taking high resolution pictures is pretty cool. But it’s probably best to think of the SC1630 as a phone that runs some Android apps rather than as a phone with a better-than-average camera. As a phone the screen feels small and the touchscreen isn’t very responsive. I’m not sure I’d want to read websites or play games on this device — but uploading videos to YouTube and photos to Facebook? Sure, I’d do that.

Update: As Johnny Cosme points out in the comments, this appears to be a rebranded Altek Leo A14. That’s not necessarily a bad thing though, as that camera/smartphone was not previously available in the US.