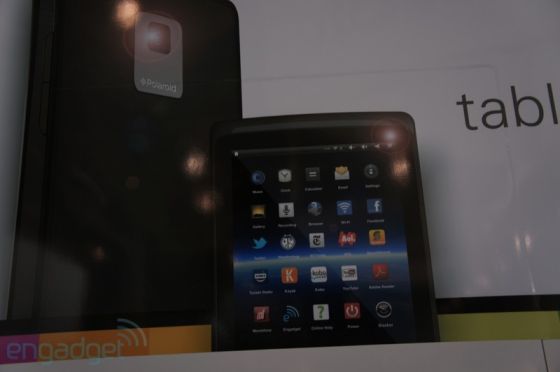 Polaroid is best known for its cameras that allow you to print shots right away on small piece of photo paper. Digital photography has largely turned the classic Polaroid camera into a niche product at best, but the company also has its own digital camera line. Now Polaroid is also apparently entering the Android tabelt space.

Engadget snagged a few photos of an upcoming Polaroid tablet, with the front and rear cameras featured prominently. Something tells me you’ll be able to snap a photo and view it on the big screen instantly… just like you can do with most other Android tablets that have cameras.

But given Polaroid’s background, I suspect we’ll see better-than-average cameras on this tablet.

Whether you want to actually hold up a tablet-sized device to the world to snap pictures or shoot videos is another matter altogether.

We should have more details about the tablet’s operating system, processor, size, and other specifications once CES is officially underway.

2 replies on “Polaroid to launch a tablet… with cameras”