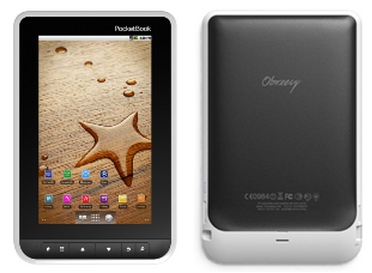 The company typically produces eReaders, and the A 7 is positioned as a “multimedia reader.” It includes eBook software with support for EPUB,PDF, FB2, TXZT, HTML, DOC, and other file formats. It also supports Adobe DRM.

At first glance the PocketBook A 7 might look a lot like other 7 inch Android-powered eReaders including the Barnes & Noble NOOK Tablet or Amazon Kindle Fire. But it does have a few features which help set it apart, including:

On the other hand, the B&N and Amazon tablets both have faster 1 GHz TI OMAP 4 dual core processors.

The PocketBook A 7 has a capacitive touch panel with support for multitouch input, a headphone jack and stereo speakers, and support for MP3, WAV, AVI, MKV, and MP4 media files. It has a white plastic case and weighs 0.9 pounds.

Unfortunately there’s still no word on the price or release date.