Orchard has introduced a new rugged tablet designed for outdoor use. It has a 7 inch Pixel Qi display which can function as a full color LCD display or a high contrast (nearly black and white) sunlight viewable display when the backlight is turned off. 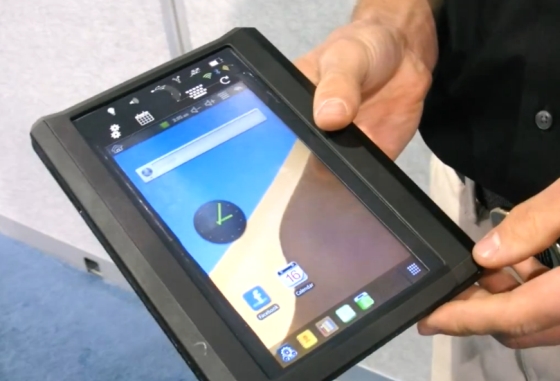 While Orchard is showing off the tablet with Google Android, the company also plans to offer webOS and Windows 8 models.

But it’s the rugged features that set the Toughlet apart from most tablets. It has a titanium/aluminum alloy case, a Corning Gorilla Glass scratch-resistant display, weatherLox technology to keep out moisture, dust, and other particles, and a nickel-zinc battery which can handle high temperatures better than lithium-ion batteries.

The tablet isn’t aimed at the general public. The idea is that the Toughlet could find a home in construction, engineering, manufacturing, or other jobs where it would be exposed to the elements. The company is also targeting education and corporate fields.

Orchard plans to start producing tablets during the second quarter of 2012 and will work on special orders and customization based on clients’ needs in the third quarter of the year. A base model will run about $550.

Charbax from ARMDevices got a look at a Toughlet at the Consumer Electronics Show earlier this month and shot a video of the tablet.

It’s not the prettiest tablet on the market, but the demo unit has a few unusual characteristics including dual SDXC card slots, a dedicated flashlight button. The demo model in the video doesn’t have a Pixel Qi display, but that will be a standard feature on the final production units.