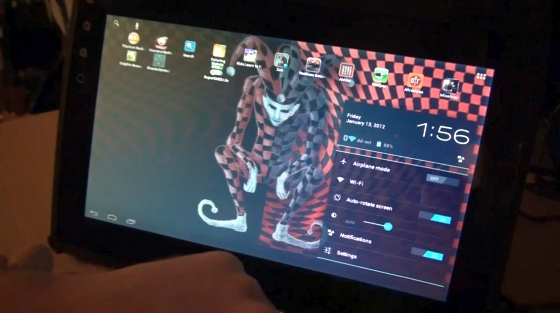 Notion Ink has released an alpha version of Android 4.0.3 for the Adam tablet. It comes a little over two weeks after the first pre-alha release, and includes a host of fixes.

Audio, Bluetooth, GPS, and a number of other features are now working properly. But Android 4.0 for the Adam is still a work in progress. The camera doesn’t work yet; there’s no support for USB mass storage, there’s a bug affecting sleep, and while HDMI video playback is supported, there’s no sound yet.

You can find more details about what works and what doesn’t in Notion Ink’s official announcement, or check out the video to see what it looks like.

The Adam is a 10 inch Android tablet developed by Indian startup Notion Ink. The tablet made a bit of a splash when it launched last year as it was one of the first devices with an NVIDIA Tegra 2 dual core processor and one of the first to feature an optional Pixel Qi sunlight-readable display. But the screen implementation wasn’t very good, the software was a little funky, and Notion Ink ran into a few problems with the ordering process.

The tablet is still one of the more innovative Android devices we’ve seen over the last few years. But at this point it’s a niche product at best. It’s good to see the company continuing to support the Adam, but Notion Ink isn’t doing it alone. The company is working with the hackers at TabletROMs to port Android 4.0 to the tablet.