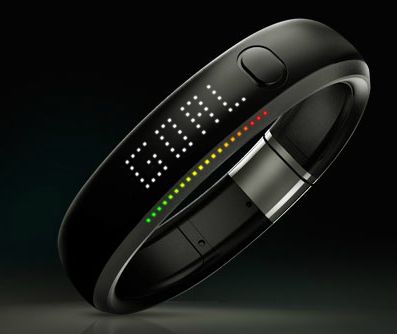 Remember when digital watches with calculators were state-of-the-art wearable computers? Now you can slap an iPod Nano on a wrist strap and carry music and apps around on a portable color screen. But there’s another frontier in the wristputer space, and it’s focused on fitness.

Now Nike is launching a slick-new wristband called the Nike+ FuelBand. It can track your steps, calories burned, or time exercised — but also tracks a new metric called NikeFuel which is basically how much oxygen you’re consuming by performing a given task. In other words it doesn’t just monitor our fitness activity when you’re walking or running, but also when you’re sitting still, playing games on yoru Wii, or doing just about anything else.

The FuelBand has built-in LEDs that glow red or green to let you know when you’re reaching your fitness goals (or failing to do so). They can also display text or numbers to show your score, distance traveled, or the time.

You can pair the $149 FuelBand with an iPhone over Bluetooth to upload your data to the Nike+ app. You can also connect the wristband to a computer using a USB cable to upload your data so you can track progress, view achievements, or share your info.

$149 seems like kind of a lot of money to spend on a device that doesn’t play music or even have much of a display. But the FuelBand should run for around 4 days on a charge and takes us another step toward a future where wearable sensors help our mobile devices provide us with more information about the world and our movement through it.