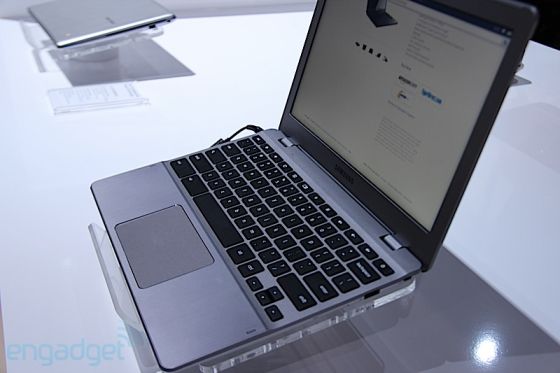 Samsung is updating its Series 5 Chromebook by swapping out the Intel Atom N570 dual core processor for a faster (but still hardly top-of-the-line) Intel Celeron processor.

The new Chromebook will still have a 16GB solid state disk and Chrome OS operating system, which means that basically the laptop will run nothing but a web browser and web apps. But it should do that a little faster than before.

I was pretty underwhelmed by the Series 5 I reviewed last summer, because not only is the idea of doing everything in a web browser limiting, but the browser actually felt pretty sluggish. Hopefully the new processor will fix that.

Engadget reports the next-gen Series 5 Chromebook will be available in the second quarter of 2012 for $399 and up.

Samsung is also finally starting to show off its Chromebox, a small desktop computer designed to run Chrome OS. It will retail or about $400 and will likely be aimed at the business and education markets.