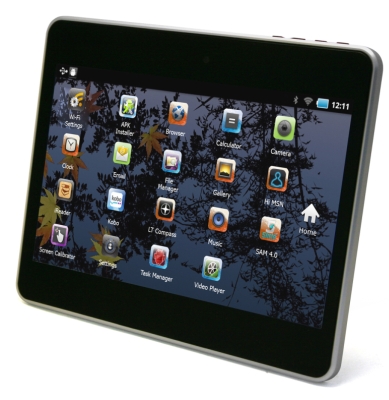 Both tablets will ship with Android 4.0 Ice Cream Sandwich and Adobe Flash Player 10.3. They also both have capacitive touchscreen displays.

It wasn’t that long ago that you wouldn’t find most of those features in a tablet that cost less than $400. But Google has released the source code for Android 4.0 which allows tablet and phone makers to put the operating system on all sorts of devices. NVIDIA is also moving forward with its next-generation Tegra 3 quad-core processor, so I suspect Tegra 2 chips might be getting cheaper for device builders.

It’s an interesting time in the tablet space, and I suspect we’ll continue to see high-end premium products hit the market. But I think the performance/feature gap between high-end and low-end tablets will get smaller as well.

When the iPad and Android tablets started hitting the streets, a lot of people wanted to compare them to netbooks. After all, they were both affordable portable devices that you could use to surf the web or perform other tasks on the go. But today’s tablets are really a whole new class of device that’s difficult to compare with anything that came before (yes, there were PC tablets before, but they were expensive, powerful, and typically got lousy battery life).

Netbooks, on the other hand, were basically notebooks. They were just cheaper, smaller, and lighter than most of the notebooks that had come before. That’s largely because the first netbooks used older technology that could be picked up at low prices and slapped together to make an inexpensive computer.

In 2012 we’re starting to see the same trend in tablets. By slapping together some slightly older parts and throwing on some open source software, smaller companies like Leader International are releasing tablets that look a lot like last year’s top-of-the-line products from big-name computer companies… but for much lower prices.

On the other hand, I haven’t had a chance to actually play with the new Impression 10A and Impression 7A tablets yet, so I can’t make any promises about their build quality or performance. Hopefully I’ll have a chance to check them out in person at CES next week.