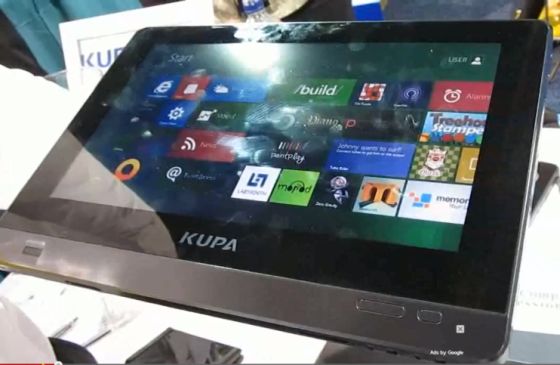 What sets the X11 apart from most entry-level Windows tablets is that it has a capacitive touchscren for finger input and an active digitizer which allows you to write or draw with a digital pen or interact with Windows by hovering the pen over the screen as well as tapping it on the display.

Right now the Kupa X11 ships with Windows 7, but later this year the company will start offering Windows 8 — and this week Kupa is showing off the tablet running an early build of Microsoft’s next-generation operating system.

The tablet has a sturdy, almost industrial design and it’s aimed at mobile professionals. It has a built-in fingerprint scanner for security, for instance.

While I haven’t been impressed with Atom-powered tablets in the past, Windows 8 seems pretty zippy on the tablet. I suspect the active digitizer helps, since it makes navigating Windows apps with a pen almost as easy as it would be with a mouse.

It features WiFi, Bluetooth, front and rear cameras, and 2 full-sized USB 2.0 ports. The tablet weighs a little over 2 pounds.

The Kupa X11 is currently available with a 64GB solid state disk and Windows 7 for $699. Pricing for the Windows 8 model hasn’t been set yet, because Microsoft hasn’t revealed the pricing for the operating system.