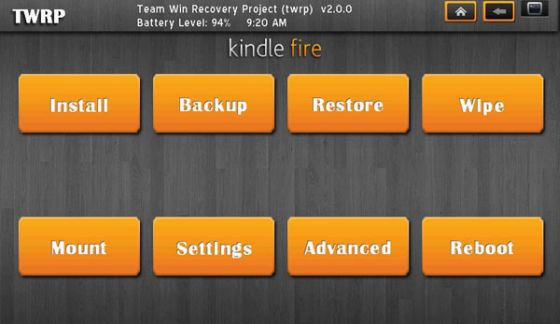 Hackers have been making progress porting Google Android 4.0 to the Amazon Kindle Fire and making other changes to Amazon’s $199 tablet.

A few days ago he managed to add support for CPU scaling which improved battery life so that the tablet can run for over 6 and a half hours on a charge. He’s also working on a tweak to the Android menu bar which adds a persistent volume icon, making up for the fact that Amazon didn’t bother putting volume buttons on the side of the Kindle Fire.

Android 4.0 is still a work in progress. Video still doesn’t work properly and audio only works sometimes. The list of bugs is still pretty long.

Meanwhile xda-developers forum member nfinitefx45 has released a custom skin for TWRP 2.0 which makes the recovery utility look like something designed by Amazon.

TWRP 2.0 is the tool that allows users to create or restore backups of their system, flash custom ROMs, or install other software. Installing TWRP can be a bit of a pain in the neck, but it currently provides the best way to install Android 4.0 or other custom versions of Android on the Kindle FIre.

The new skin features a gray and orange color scheme which actually makes TWRP easier to read than the default gray-on-black theme.