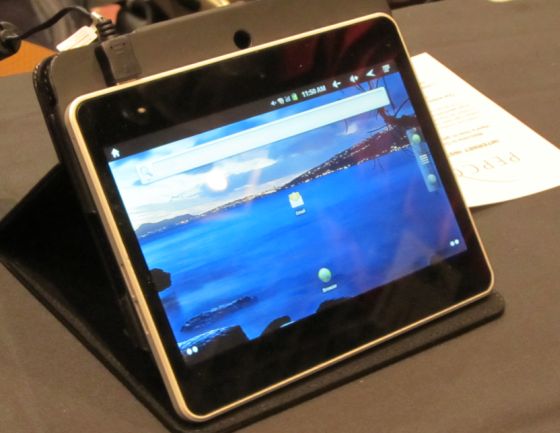 Leader International plans to launch two tablets running Android 4.0 Ice Cream Sandwich soon. One will be a 7 inch model with a 1 GHz ARM Cortex-A8 processor and a $179 price tag, while the other will be a 9.7 inch tablet with an NVIDIA Tegra 2 dual core processor. That version will sell for $299.

The company is still finalizing the details for these tables. Samples of each were on display at an event in Las Vegas last night, but the tablets were running Android 2.3 Gingerbread instead of Android 4.0. The company hasn’t yet decided which ARM Cortex-A8 chip to use in the 7 inch model. And even the case design is still in flux. I was told that some of the ports and buttons would be moved around on the final production units.

The smaller tablet has a 1024 x 600 pixel capacitive touchscreen display and a rather oddly shaped screen bezel that makes the tablet look like it should have a 4:3 aspect ratio rather than a 16:10 display. It is, however, thin, light, and comfortable to hold in one hand.

Both of these budget tablets looked a lot more exciting before Asus announced that it release a $249 tablet soon with a Tegra 3 quad-core processor, a 7 inch 1280 x 800 pixel display, and Google Android 4.0.

While Google’s decision to loosen hardware restrictions for tablet makers with Android 4.0 opens the door for a number of companies to launch budget devices, it’s going to be hard for those companies to compete if some of the major players in the Android tablet space such as Asus bring high quality products to the low-cost tablet game.