Research in Motion has spent a lot of time playing with the pricing for the BlackBerry PlayBook tablet over the last few months. At times you’ve been able to pick up a 16GB tablet for as little as $199, while 64GB models dropped to $299. Other days the tablet sells for the same $499 that it cost when RIM introduced the PlayBook in early 2011.

Now RIM is running the strangest promotional pricing yet: You can pick up any BlackBerry PlayBook for $299. The new pricing covers the 16GB model, 32GB model, and the 64GB model. The sale runs through February 4th. 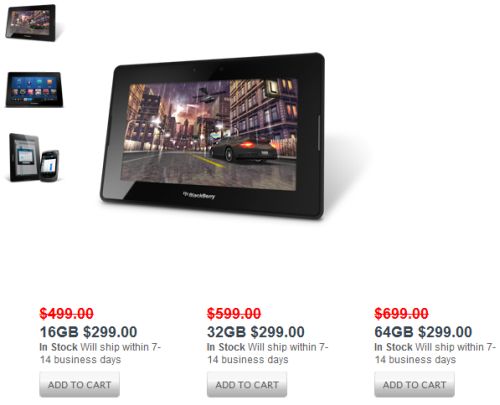 I don’t see any reason to get anything other than the 64GB model for that price.

The deal is available from the official BlackBerry Store. Other retailers seem to be selling the PlayBook for $499 and up.

The BlackBerry PlayBook features a 7 inch, 1024 x 600 pixel display, a 1 GHz TI OMAP4 dual core processor, and BlackBerry Tablet OS. While there aren’t nearly as many third party apps available for PlayBook OS as for Android or iOS, the PlayBook’s hardware is pretty solid. And if you install PlayBook OS 2.0 beta you can even install some third party Android apps on the tablet.

Or if you want to be even more adventurous, you can follow our guides for rooting the PlayBook and installing the Android Market to make finding and installing supported Android apps even easier.