Budget consumer electronics company Coby has introduced a new line of inexpensive tablets designed to run Google Android 4.0 Ice Cream Sandwich. They range in size from 7 inches to 10 inches, and Coby is pricing the cheapest models at $179, with the most expensive of the bunch coming in at $299. 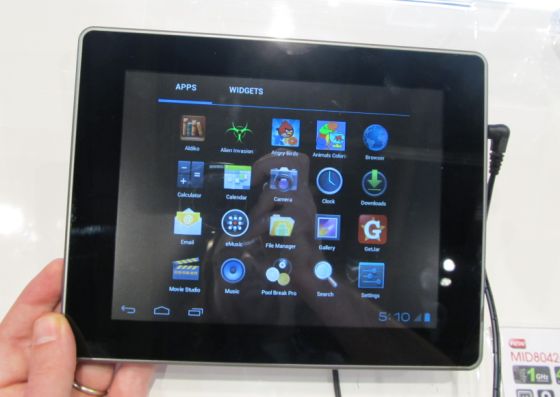 They could start shipping as early as March.

Update 3/27/2012: As expected, Coby started selling these tablets in the US in late March for prices starting at $150.

All of the new tablets are powered by 1 GHz Allwinner ARM Cortex-A8 single core processors and they all have 1 GB of RAM and capacitive multitouch displays. But to be honest, the samples Coby has on display at CES still feel a little sluggish.

That could be due to the fact that these are pre-production units, but it would probably be silly to expect these low-cost devices to be comparable to high-end tablets with NVIDIA, Texas Instruments, or Qualcomm multi-core processors.

That said, the tablets look pretty nice and feel pretty sturdy, and they do run Google’s latest operating system. They come preloaded with the GetJar app store which allows you to download around 50,000 free Android apps. Coby is in talks with Google about the possibility of gaining Google Certification which would allow the company to add the Android Market and Google apps such as Gmail or Google Maps.

Here’s a run-down of some of the new tablets.

All of the tablets have microSDHC card slots which support up to 32GB of additional storage.