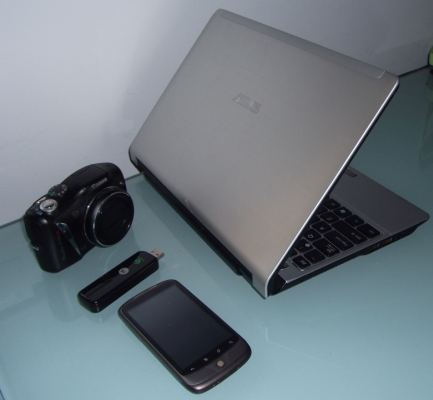 I’ll be spending next week in Las Vegas covering the 2012 Consumer Electronics Show. Since I cover mobile technology on a daily basis, I figured you might want to know what’s going in my gear bag.

As it turns out, this year’s kit looks an awful lot like last year’s. I’m still using the same camera, laptop, phone, and modem. If it ain’t broke, don’t fix it.

I suspect that in another year or two it may be time to retire my aging laptop and replace it with something that gets a little longer battery life and offers a little more power for transcoding HD videos. But last month I gave it a cheap fountain-of-youth injection by picking up a spare battery on eBay.

Here are the items that I’ll be toting around on the show floor and in press conferences this year.

This will actually be my UL20A’s third trip to CES — but I couldn’t use it the first year because the display broke shortly after I bought it and I had to send it in for repair. It’s been fine ever since. But I wound up covering most of the show in 2010 with my wife’s Asus UL30A 13.3 inch model instead.

I took a photography class in high school, way back when more than half the class focused on developing prints in a darkroom. I never really got the hang of using an SLR though, so when I decided it was time to find a better camera last year I opted for a point-and-shoot with a wide-angle lens, a 12x optical zoom, and the ability to shoot 720p HD video.

The Canon SX130 has an annoying 10 minute video limit, but I’ve tried to turn that restriction into a feature by keeping my videos brief.

WiMAX may be losing the 4G popularity contest to LTE, but I picked up a CLEAR WiMAX modem a few years ago when I was experimenting with replacing my home DSL service with 4G.

That didn’t work out very well, but I’m now the proud owner of a USB modem that CLEAR doesn’t even sell anymore. The good news is that for $10 a day, I can connect to the company’s mobile broadband without signing up for a new long-term contract.

Service tends to be pretty good in Vegas, and at times it’s been more reliable than 3G during CES week when more than a hundred thousand tech industry folks are trying to get online in one location.

I might not actually use the CLEAR modem every day. The Consumer Electronics Association sets up a few internet access points for bloggers and journalists, and I can use my aging smartphone to get online as well.

T-Mobile has never charged me a fee for tethering my Nexus One to my laptop to share an internet connection, so while I don’t want to abuse this feature, in a pinch I can use my phone to get my laptop online.

Primarily though, I expect to use my phone to keep up on email, news, and communications while I’m away from a computer. Google Maps also comes in handy when navigating Las Vegas, or any city you’re not familiar with.

If anything happens to the SX130, I can also use the Nexus One to snap photos and shoot video, although its camera really isn’t very good. I did post at least a few pictures from last year’s show that I had taken with my phone though.

Not pictured in this photo are the spare AA batteries and storage cards I’ll be bringing for the camera, the spare battery for my laptop, and charging cables.

I’m also throwing my 2008 Asus Eee PC 1000H in my suitcase as a backup. I cringe at the thought of losing or breaking my UL20A when I need it most, so it might be a good idea to have a second laptop around. But if all goes according to plan, I expect the netbook to stay in my suitcase in my hotel room — just like it did last year.

For the plane ride I also plan to take my Kindle Touch eReader and Kindle Fire tablet. Really, I probably don’t need them both, but I prefer reading on the Kindle Touch with its 30+ hour battery life, while the Kindle Fire comes in handy for playing games or watching videos.

I’ve also been spending so much time covering the Fire and NOOK Tablet over the past few weeks that it would feel strange to travel without at least one of them.