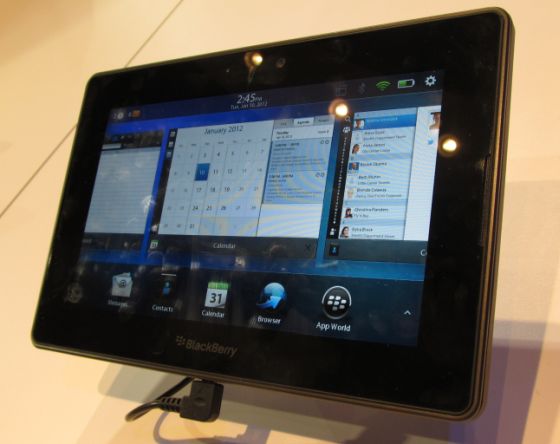 Research in Motion will roll out BlackBerry PlayBook OS 2.0 to the public in February. The OS has been in public beta for months, but RIM is showing off the new software on tablets at the Consumer Electronics Show this week in Las Vegas and plans to roll out the update to everyone starting next month.

The company is playing up the inclusion of native contact, calendar, and email apps — features that were all missing from the PlayBook when it launched in 2010. Instead, users were told to pair their tablets with BlackBerry Smartphones to access those functions.

Once OS 2.0 rolls out, the PlayBook will be a little more useful for people that don’t even have a BlackBerry phone.

The other hallmark of PlayBook OS 2.0 is support for some Android applications — but RIM doesn’t seem to have much to say about that feature at the moment. I’d be surprised if the company dropped Android app support from the OS entirely, but it’s a bit surprising that the demo tablets at CES aren’t running any Android apps.

If you don’t want to wait until February, you can follow our guide for updating to PlayBook OS 2.0 beta right now.