While Android smartphones seem to be getting bigger and bigger displays all the time, a Chinese company has shrunk down the guts of an Android phone and placed them in a wristwatch with a 2 inch, 320 x 240 capacitive touch display.

ARMDevices caught up with Shenzhen Phaeton Nice Electronics at CES earlier this month to talk about the device. 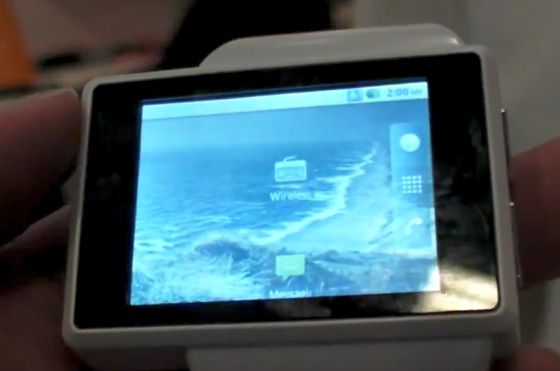 The watch isn’t exactly a speed demon. It has a MTK6516 processor and can only handle 2.5G wireless speeds for now, but the company hopes to upgrade to a MTK6573 chip with support for 3G eventually. The device also supports WiFi.

The watch has an 800mAh battery which is reportedly good for about 1.5 days or up to a week of standby time.

There’s a SIM card slot, and a microSD card slot with support for up to 32GB of storage. There’s also a USB jack built into the wristband for charging the device or connecting to a PC.

While there’s a built-in camera, it’s on the side of the watch so you can snap photos spy-style, but you probably won’t be able to make video calls with the watch.

The company is still looking for distributors for the watch. Vendors may be able to pick up orders of 500 or more units for about $200 per watch, but there’s no word on how much individual customers would have to pay for the watch.

Or you could just buy a Motorola MOTOACTV and root it if you want an Android-powered wristwatch today.

One reply on “Android 2.2-powered wristwatch with a 2 inch screen”