Acer’s latest Android tablet is now available in the US. Best Buy is selling the Acer Iconia tab A200 for $349.99 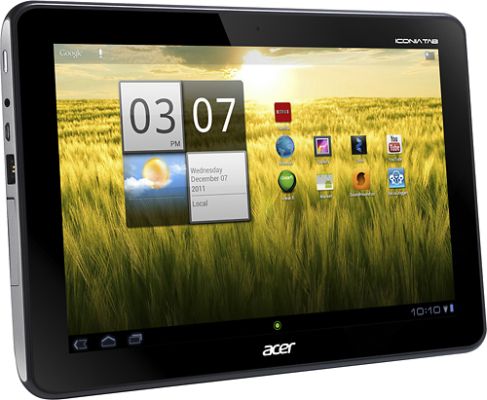 If the Iconia Tab A200 had been released in 2011, it probably would have been a top-of-the-line tablet, but now it will go head-to-head with tablets that have quad-core chips, 1920 x 1200 pixel displays, and other premium features. That includes the upcoming Acer Iconia Tab A510 and A700 — which will both probably carry higher price tags than the A200.

Acer does plan to offer a software update which will bring Android 4.0 Ice Cream Sandwich to the tablet soon, so hopefully the software won’t feel outdated for long.

The tablet has 1GB of RAM, a 24.1Whr battery, WiFi, Bluetooth, and GPS and a 2MP front-facing camera. It weighs about 1.6 pounds and measures about half an inch thick.

The Best Buy model has 16GB of storage space. A cheaper model with 8GB is also expected soon.