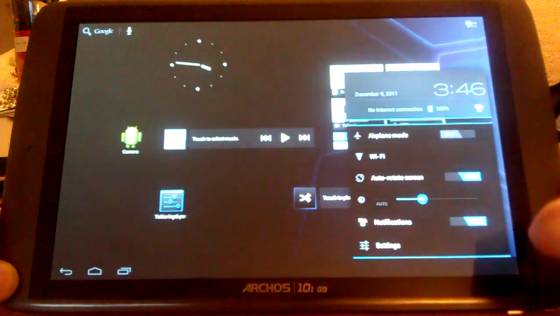 French tablet maker Archos is working to bring Android 4.0 Ice Cream Sandwich to its latest Android tablets, and recently the company showed off some of the progress that’s been made so far. But the folks at Archos aren’t the only ones porting Google’s latest operating system to the Archos 101 G9 tablet.

Xda-developers forum member LeTama has posted a video showing a very early build of Android 4.0 on the 10 inch tablet.

At this point audio, video, and WiFi are non-functional, but 3D drivers and the touchscreen work. Once WiFi is working, LeTama plans to release the software so that other Archos 101 users can try it.

Custom ROMs such as this probably won’t include all the software that Archos packs on its tablets, such as the proprietary audio and video players that Archos has developer. But if that doesn’t matter to you, it looks like you may not have to wait for an official release to start using Android 4.0 on the Archos 101.

This is just one of the latest devices to get an unofficial Android 4.0 port. Since Google released the source code for Ice Cream Sandwich a few weeks ago, independent developers have released versions of the operating system for dozens of phones and tablets — although most builds are still in the early stages and some features might still be missing.