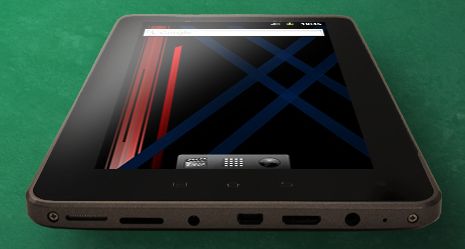 Skytex has introduced an updated version of its Skypad 7 inch Android tablet. The Skypad Alpha 2 has a 1.2 GHz ARM Cortex-A8 single core processor and Mali-400 graphics with support for 1080p HD video playback.

The new tablet has a 7 inch display with a capacitive touch panel and support for 5-point touch input. Unfortunately the Skypad Alpha 2 has the same phone-like low-resolution 800 x 480 pixel display as its predecessor.

The tablet has 512MB of RAM and 4GB of storage, plus a microSD card slot for expansion. It supports 802.11b/g/n WiFi and has a mini-USB port, HDMI output, and a front-facing VGA camera.

It runs Google Android 2.3 and Skytex says it will be upgradeable to Android 4.0 Ice Cream Sandwich in early 2012.

The Skypad Alpha 2 measures 7.8″ x 4.8″ x 0.5″ . That makes it thinner than the original Skypad Alpha, but it’s also sturdier with an aluminum case.

Skytex says the tablet will ship to resellers starting December 20th for $189 or less. That puts the new tablet in competition with the Velocity Micro T408, Lenovo IdeaPad A1, Amazon Kindle Fire, and Barnes & Noble NOOK Color.