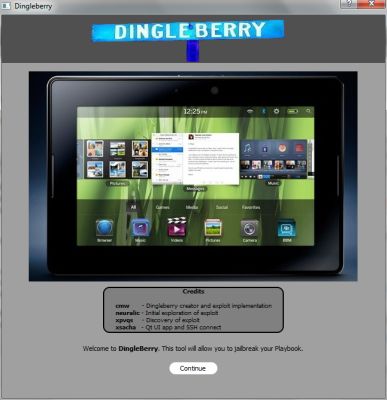 Independent developer Chris Wade has released a public beta of a tool that can root a BlackBerry PlayBook tablet. It’s called Dingleberry, and it’s available for Windows computers. A Mac version is coming soon.

Dingleberry grants users escalated privileges on the tablet, allowing you to access files and settings that would otherwise be off limits.

Wade found a way to take advantage of the fact that the BlackBerry desktop manager doesn’t require digitally signed files when you backup or restore your data. BlackBerry maker Research in Motion plans to roll out a fix for this security issue soon, so Wade decided to release Dingleberry to the public a little earlier than planned.

That means that if you use the tool to root your tablet before RIM issues its security update, you should be able to make other changes later. If not, you’re probably out of luck. So if you’ve been waiting impatiently for the chance to root your device, there’s literally no time like the present – although you should always proceed with caution before making this kind of change to your device as it will likely void your warranty and could cause problems.

Eventually Wade plans to launch tools that let users access Hulu, Netflix, and other websites on rooted PlayBook tablets. For now, all Dingleberry does is provide root access.

The BlackBerry PlayBook is a tablet with a 7 inch, 1024 x 600 pixel display and a 1 GHz TI OMAP4 dual core processor. It runs BlackBerry Tablet OS, which is based on QNX software. The tablet has been available for much of the year, but has become a little more popular with consumers in recent months since Research in Motion offered a series of promotions bringing the base price down from $499 to $199 or even lower.

Dingleberry is the first tool to offer root access to the tablet, and thanks to RIM’s focus on enterprise clients, security is a top priority for the company. It’s not surprising that the company is moving to close the security hole as quickly as possible.

Update: RIM has released a security update for the BlackBerry PlayBook which closes the hole used by DingleBerry. That means if you’ve updated your device to the latest version of BlackBerry Tablet OS, you’ll need to downgrade in order to root your tablet.

Fortunately Wade says it’s possible to do that.