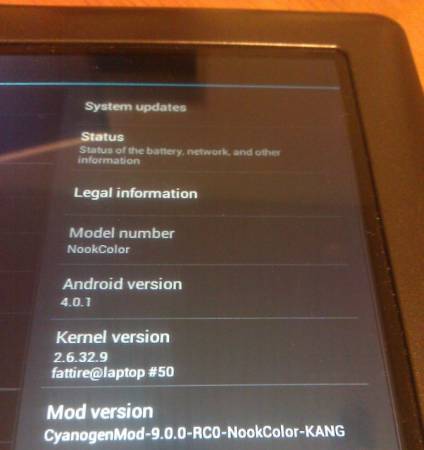 The Amazon Kindle Fire isn’t the only $200 tablet that’s already running an early version of Android 4.0 Ice Cream Sandwich. A team of developers has started porting ICS to run on the Barnes & Noble NOOK Color.

Barnes & Noble released the NOOK Color last year, and recently dropped the price to $199 to make way for the $249 NOOK Tablet. The NOOK Color has a 7 inch, 1024 x 600 pixel IPS display, an 800 MHz processor and 8GB of storage. It’s proven popular with hackers because it’s possible to install an operating system on the SD card and choose between running the standard Barnes & Noble OS or a custom ROM at boot.

Right now Android 4.0 for the NOOK Color is still very much a work in progress. WiFi works, Bluetooth works, and overclocking works. You can install the Android Market and other Google Apps.

But sound isn’t working yet, video isn’t functional, and there’s not currently full support for hardware graphics acceleration — and there may never be. That doesn’t mean that graphics will necessarily be slow on the tablet, but some aspects of the user interface might not be as smooth as on other tablets.

The good news is that NOOK Color owners may soon be able to run the full tablet versions of Android apps instead of relying on apps designed for smartphones.

Developers Dalingren and Fattire are using CyanogenMod 9 as the basis for their work. , but the source code is available for anyone comfortable building Android from source. If you’re not comfortable with that, you should probably wait until there’s a more stable build available anyway.

Update: Fattire has compiled an early build of CM9 based on Android 4.0 for the NOOK Color. It’s available for anyone to flash by using ClockworkMod Recovery — but it’s extraordinarily buggy and only recommended for developers and others that are willing to lose data on their devices.

You can pick up a refurbished NOOK Color from the Barnes & Noble eBay Store for $149, which could make it one of the cheapest Android 4.0 tablets with an ARM-based processor.