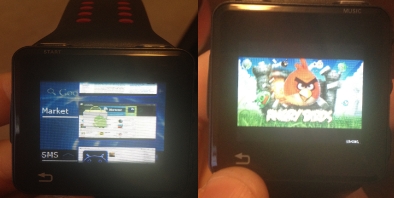 The Motorola MOTO ACTV is sort of what you get if you stick a watch, an iPod Nano, a GPS device, and an FM radio in a blender. It’s an odd device with a starting price of $249 which is aimed at runners and other fitness enthusiasts.

But there’s something kind of cool about the MOTO ACTV: It’s basically a little Android-powered watch. And you can root it and install all sorts of Android apps to extend its capabilities.

That’s exactly what Chris Wade has done. By rooting the watch, he’s been able to install an app launcher, Android Market, Google Maps, YouTube, the Skyfire web browser, and even Angry Birds.

The 1.6 inch screen is kind of tiny for watching videos or playing games, but Wade says Android is surprisingly usable on the little display.

Wade has also posted tools and instructions for rooting the device at his blog. You’ll need to have adb and fastboot from the Android Software Developer Kit installed on your computer for his instructions to work.

If Wade’s name sounds familiar, that’s because he’s one of the people responsible for the Dingleberry tool which can be used to root a BlackBerry PlayBook tablet.