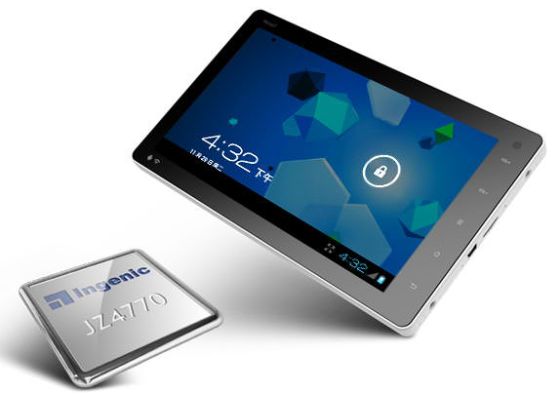 Google Android 4.0 Ice Cream Sandwich is the first version of Google’s mobile operating system that’s designed to support phones and tablets — and that means that companies making dirt cheap tablets can finally use the latest Android software. Chip designer MIPS has announced that one of the first is a $100 tablet with a 1 GHz Ingenic Xburst processor called the Novo 7.

Up until recently budget tablet makers had to Android 2.3 and below since Google only allowed selected partners to use the tablet-friendly Android 3.0 and newer software. That meant most tablets that cost $200 or less used a version of Android that was designed for phones rather than tablets, and lacked access to the official Google Android Market and Google apps including Gmail, YouTube, and Google Maps.

But the new MIPS-based tablet includes the same Android 4.0 software that’s available on high-end devices such as the Asus Eee Pad Transformer Prime.

Of course, you get what you pay for. The budget model won’t be as fast and won’t have the same kind of graphics performance as more expensive devices. Many Android apps may also not be designed to run on devices with MIPS chips, so the software available for the tablet may be limited. But it will have the same tablet-friendly user interface.

The new MIPS tablet is already available in China from Ainol Electronics and it will be available in the US and other countries in the coming months.

The tablet has a 7 inch capacitive touchcscreen with support for multitouch input. It has 802.11b/g/n WiFi, HDMI, and support for 1080p HD video playback. It has a Vivante GC860 graphics processor.

The tablet also has front and rear cameras and USB 2.0. Models with 8 and 9 inch displays are also in the works.

One reply on “MIPS unveils a $100 tablet with Android 4.0 Ice Cream Sandwich”