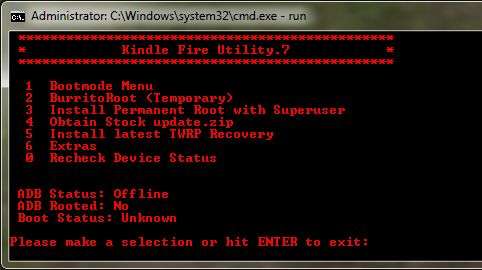 Then Amazon went and released a major software update which caused the tools people had been using to root their tablets to stop working. Developer jcase came out with a new tool called BurritoRoot, but it’s a little more complicated to use than Kindle Fire Utility… but now it’s just as easy to use, because BurritoRoot has been built into the latest version of VashyPooh’s utility.

If you download Kindle Fire Utility 0.7 or later, you can use it to root a Kindle Fire running OS version 6.2.1 or earlier.

There are options to temporarily root your tablet, permanently root the tablet and push Superuser to the device, download the latest stock update from Amazon, or install the latest version of TWRP which lets you flash custom updates or even replace the operating system with CyanogenMod or other software.

In order to use Kindle Fire Utility, just download the latest file from xda-developers, unzip it to a directory on your computer, and tap the run.bat file to get started.

If your device isn’t recognized you may also have to use the included script to install the drivers for the Kindle Fire on your computer. If that doesn’t work, check out our instructions for configuring ADB in our original (and somewhat dated) tutorial on rooting the Kindle Fire.

Also, if you’ve already used BurritoRoot to root your Kindle Fire, make sure to uninstall it before using Kindle Fire Utility 0.7.