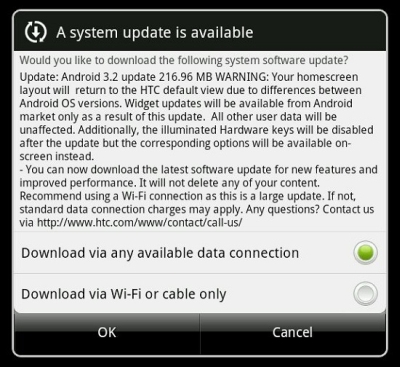 The HTC Evo View 4G is a 7 inch Android tablet which works with the Sprint 4G WiMAX network in the United States. It’s basically what you get if you take an HTC Flyer tablet, slap a little extra black paint on the back and add a 4G radio.

When the Evo View 4G launched this summer it came with Google Android 2.3 Gingerbread and had a starting price of $400 for customers that signed up for a 2-year service plan.

Now you can pick up a contract-free model for $300 or less. And an over-the-air update is bringing Android 3.2 Honeycomb to the tablet.

Update: It’s on sale right now for $240 from the 1SaleADay eBay store.

The Evo View 4G has a 1.5 Ghz Qualcomm Snapdragon single core processor, 1GB of RAM, and 32GB of storage. It weighs about 0.9 pounds and has a 1024 x 600 pixel capacitive touchscreen display. It can also be used with a digital pen for writing, drawing, or editing screenshots.

The software update lets you run tablet apps on the Evo View, use on-screen home, back, and recent menu buttons, and use Google video chat. The new software also allows you to use Bluetooth while in airplane mode.

If you have a rooted Evo View 4G you should avoid this update, since it’s been reported to cause the table to go into a reboot loop.

If you’re not rooted and looking for a 7 inch Honeycomb tablet, the software update makes the Evo View look like a pretty good deal — especially if you can snag one when it’s on sale for $250 or less, which seems to be happening more and more often these days.

Update: It looks like it’s now safe to upgrade a rooted tablet. Android Central has instructions for unbricking if you run into trouble.

via Good and Evo