If you’ve already rooted your BlackBerry PlayBook, you may have encountered a screen like the one above. Unlike a run-of-the-mill Android tablet, there’s no box to check that lets you install Android apps from “unknown sources.”

Instead, you can install Android apps that have been converted to BlackBerry PlayBook apps by downloading them from the BlackBerry App World or another location. Or you can root your tablet and install the Android Market to download apps.

But there is a way to sideload apps that aren’t available from the Android Market.

On my PlayBook, for example, I used the method described below to load Firefox Nightly and Google Currents — an app which isn’t available in Canada’s Android Market yet.

Before you get started, you’ll need to make sure your PlayBook is rooted using Dingleberry. Have a look back at the tutorial and follow the steps if you haven’t done that yet.

You’ll also need PlayBook OS 2 beta installed in order to run Android Apps and Android launcher app installed from the list at Playbookbars.com (Zeam and Launcher Honeycomb work quite well) that has been pre-packaged for use on the PlayBook (otherwise you won’t have a way to launch your sideloaded apps). 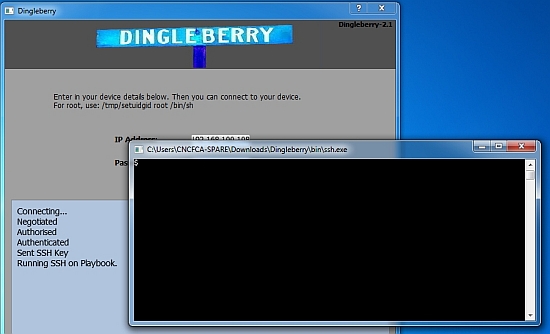 Now, launch Dingleberry on your computer. On the main screen, click the Dingle SSH button near the top. Next, enter the IP address and password for your PlayBook into the blanks and click the connect button.

You should see a window like the one above. When the black command prompt window appears, your PlayBook is ready for SSH connections.

Next, launch WinSCP on your computer. If you don’t have it or aren’t sure why it’s needed, take a look at the tutorial on installing the Android Market on the PlayBook for some insight. 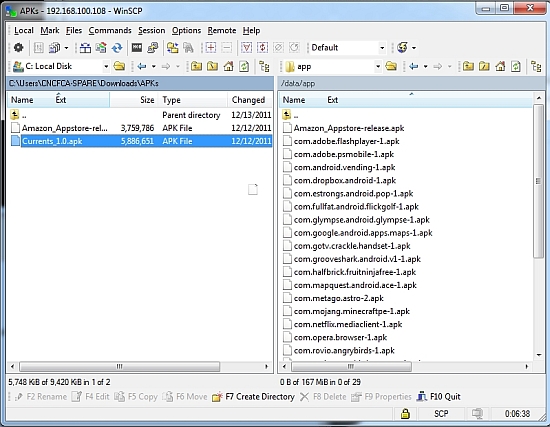 Once WinSCP has connected to your PlayBook, browse to the /data/app folder in the right-hand pane of the file transfer window. On the left, browse to the folder on your desktop where you’ve saved the .APK of the Android App you want to install.

Click and drag the app over to the /data/app folder and release your mouse button, and let WinSCP copy the file.

Now pick up your PlayBook and simply tap the launcher app you’ve installed and tap the apps icon to pull up the full list of Android apps you have installed on your PlayBook. Your new app should appear automatically!

Before you get too excited…both Angry Birds apps force close and the Amazon Appstore isn’t able to install apps just yet.

Hopefully that will change soon, as more people root their Playbooks and figure out new tricks. In the meantime, you can use Dingleberry and WinSCP to load Android apps on your BlackBerry Tablet to see which ones work.